Over the last couple of gaming nights we’ve given Sam Mustafa’s new ruleset, Blücher, a run. I fancy it for the larger battles as it would allow us to manage something as large as Bautzen on a single table.  As discussed in the previous post, it may do service for all battles. I will make some observations about the rules and how intend to use them.  Do not mistake this for a review.  We’ve played two battles (and I played in neither) with home grown scenarios.  Nothing I say at this stage represents a considered view.

The rules scale up and down depending on the task at hand.  While it is designed as brigade scale, a base can range from 1-2,000 men up to 5,000 and anywhere in between. That’s pretty handy if you have Leipzig in your sights and it’s also handy of you are running a campaign with large variability in battle size.

I was pretty impressed.  It’s quick, was easy enough for our non-miniatures players to pick up and it provided sufficient differentiation and feel.

You can find the scenario here: (Battle of Ligny Blucher Scenario) and read some feedback on the Honour forum here.  At the time of this post it is draft, but I will keep the link pointing to the latest (and eventually final) version.  The victory conditions I’ve imposed and objectives I set will tend to push the battle down the historical path. But there is scope to win by breaking you opponents army, so almost any strategy can be attempted.

Our refight was pretty historical with the exception of the Prussians unleashing Thielmann and his III Corps across the river in the east at start.  I think that was good thinking, one of Blücher’s (the commander, not the rules) characteristics in this system is to raise the break point of an army to near unassailable levels.  As long as the Prussians were careful, committing Thielmann could only interfere with French victory.

In the end the French fell one objective short (the windmill), resulting in a draw.  I am unhappy with that result and may revise the scenario to classify this outcome as a Prussian victory. 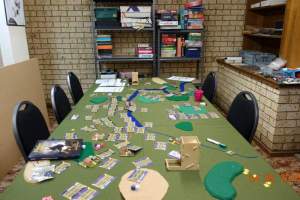 The game played smoothly and the scenario provided a good introduction.  The deceptively simply move system (pivot then move straight ahead or do something more complex by giving up half your move distance) produced challenges and we clearly need to think about flexible higher level formations.  There was no shortage of masked guns and cries of lament when players worked out that they needed something different in terms of units, formations or strength at the pointy end. For example, at the end of the game the Prussians lost a chance to retake Ligny because they had not moved up fresh troops ready for the counter-attack.

I think a great deal of the coördination challenge was the fast pace of the game.  Players only get 15-18 turns in a day and Ligny starts more than half way through that. Consequently, the French need to motor which is challenge given their army is a bit brittle.  Due to the small number of turns at Ligny, it’s too late to think about committing reserves when the need arises. You cannot afford the action to continue for three out of nine turns before your reserves are felt.  In three turns, most combats will be pretty thoroughly decided one way or another.

Quatre Bras was a puzzle.  It’s too small for normal scale Blücher so I designed it with the small scale framework (1-2,000 men per unit and not 2-3,000).  Scaling is very useful, but you need to fully understand what you are doing when designing a scenario. The simple scaling in the rules introduced time and space problems at a 75mm base width.  Most of the Anglo-Allied army was able to arrive before much fighting or much of a French advance had happened.  So we restarted and I multiplied the turns by 1.5 (the same as the unit and ground scale change).  This seemed to fix the issue. 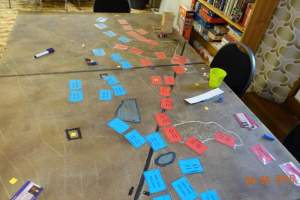 As I mention in the scenario, Ney had no chance of winning once he waited until 2 pm to attack.  The game bore that out and the victory conditions I had set the French were never going to be achieved.  My bad.

The rules are very different to any the players had tried before so we struggled with some of the concepts.  Things that puzzled people or raised comment included:

Not all commanders are specifically represented

Sam takes the not unreasonable approach of only representing exceptional commanders

Artillery run out of puff

When gathered into units artillery capacity degrades as it bombards and the units are good for about 6 shots.  This one caused a stir and I’ll reserve my comments until I’ve played a few times.  For now, I’ll just say my research while developing the Quatre Bras scenario below included an account of the worn Dutch Belgian artillery being withdrawn after a couple of hours of battle and taking no further part in proceedings.

Cavalry are not thunderbolts

In most rules, if cavalry attack fresh infantry not in square, they schrork them (yes, that’s where the name of our rules came from) – always, each and every time, without exception.  In this game, your cavalry will take casualties against fresh opponents, instead you want them riding down the weakened units that don’t throw too many defence dice.  Of course, that’s the way cavalry was usually used. Napoleon’s advice to his own cavalry in 1806 was to only charge retiring infantry and unsteadiness was the sign cavalry looked for. Yes, there are exceptions where cavalry was masked by terrain and were able to surprise otherwise steady infantry.  Think of that as exceptional die rolling.

This limits the usefulness of committing multiple units to one attack.

If a game/combat depends on just a few rolls then extreme outcomes can be a problem.  One of our players seemed to get a lot of outlier results.  This is odd as it seems to me the number of dice rolled should mitigate too many extreme outcomes. We need more experience with this one. Maybe we need a re-roll house rule.

It may also be that we don’t need a re-roll rule. The simple basic combats have built-in balances, more dice makes a win more likely and a disastrous loss less likely.  So the occasional line unit can successfully attack or resist the guard, but likely won’t hurt it much.

This is always a tricky one and as Sam says, you can always change ratings you aren’t happy with. The French struggled at Quatre Bras in terms of quality so we would downgrade the Nassauers to something less than French line. After all, with the exception of a couple of units in the woods, they were soundly beaten in less than 90 mins by the front edge of roughly equal numbers.  In fact, I wonder if I wouldn’t stretch the ratings range to 5-9 from its current 5-8.  No doubt the playtesters on Sam’s forum will have a view.

A subset of the issue above, some players questioned why conscript suffered no disadvantage facing line infantry troops (most of their restrictions are to do with manoeuvre).  I figure an extra die and skirmish ability was probably enough. However, some units with conscript had higher elan (morale and combat rating) of 6 making them the equal of the French line.

Another instance up and going

What We do next

A look at what Ruth and I get up to. Travel, fitness, hobbies and thoughts